The embryology laboratory is housed in a state-of-the-art, innovative facility that meets the most recent specifications for quality and advanced service provision; it is certified by international certification agencies for the provision of high-quality services.

The embryologists of the laboratory are experienced, highly trained with extensive research work and publications and with respect for each couple’s special characteristics, capable of providing scientific services at the highest level.

The state-of–the-art embryology laboratory, thanks to its highly trained staff, has the most advanced systems for embryo culture, ensuring consistently high rates of successful pregnancies and providing the best that contemporary Medicine has to offer in this field.

In particular, the laboratory has a special recording system for temperatures, CO2 levels, pH inside the embryo incubators and the culture media, in order to monitor constantly and in real time the perfect operation of all laboratory equipment. The laboratory is also equipped with a special system that continuously records the temperature, humidity and organic particle levels inside the facility, thus ensuring an environment of the highest quality for IVF and embryo culture procedures. These special recording systems in the embryology laboratory are active 24 hours a day, 7 days a week, and on non-business days they are connected to a special Alert system which notifies the Biologist on call for any problem that may occur. 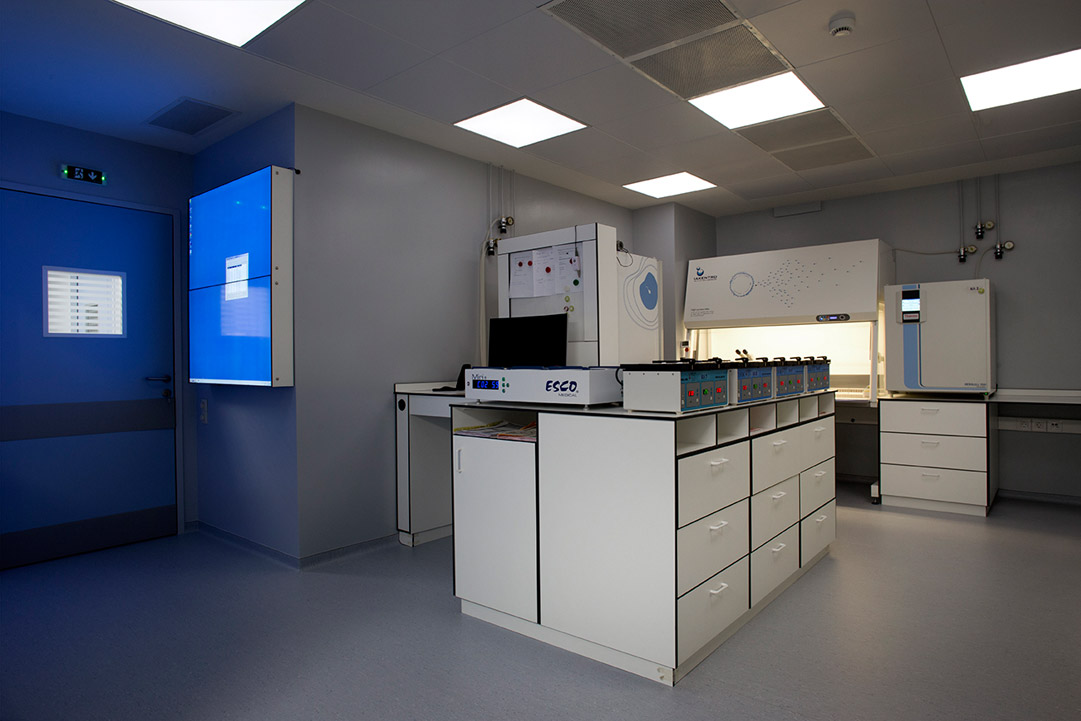 Frozen eggs, embryos and sperm are kept in liquid nitrogen containers that are equipped with special, continuous-recording temperature detectors.

Furthermore, the embryology laboratory in particular and our clinic in general have a fully automated tracking system for all of our patients’ biological materials and procedures – a high-tech system named Cosmos.

Each infertility case that we treat at IAKENTRO is unique. By adopting this approach, we implement a large number of modern and customised techniques in order to increase the success rate for each attempt.

Embryos, in their first stages of development, are enclosed in an external transparent shell, the zona pellucida, which protects the foetal cells. In the 5th-6th day of cell division, with the embryo being in the uterus, this zona is ruptured at some point (hatching) in such a way that the foetus can come out and be implanted into the endometrium.

However, in some cases of IVF, it is deemed necessary to assist hatching by reducing the thickness of the zona pellucida. This procedure is performed on the date of embryo transfer, using special lasers. This technique significantly increases the possibilities that the foetus will implant in the uterus.

Assisted embryo hatching before embryo transfer is recommended in the following cases:

The selection of sperm to fertilize a couple’s eggs is based on morphology and motility criteria. Nevertheless, in some couples this assessment is not sufficient. Specifically, in cases such as, a) severe male infertility related to poor sample morphology resulting in a low fertilisation rate or b) low embryo quality in previous unsuccessful attempts and miscarriages, it is recommended to apply the method of selecting morphologically intact sperm and subsequently injecting it into the eggs. This method has an additional benefit compared to micro-fertilisation (ICSI), as it permits the detailed selection of sperm using a special, very high-magnification microscope. The best sperm are selected based on specific morphological criteria. In this manner, improved sperm morphology is assumed to be associated with better development potential for better-quality embryos, and ultimately an improved percentage of pregnancies.

Often, a couple’s unsuccessful attempts to get pregnant or repeated miscarriages may conceal genetic or chromosomal anomalies located in the husband’s sperm. During egg fertilisation and karyogamy (fusion of the nuclei), these anomalies are transferred to the genetic material of the foetus, and in cases such as severe chromosomal aneuploidy, this might be the cause of miscarriage.

Following the assessment of all the parameters (concentration, motility, morphology), the sperm sample is processed and fixed in order to implement the technique. In FISH, special fluorescent detectors are used that bind to DNA areas in the chromosomes. In this manner, with the form of the detectors’ fluorescence any eventual aneuploidies are identified in the 12 tested chromosomes and the results are recorded as percentages.

The results of this technique might reveal an abnormal percentage of aneuploidy in the tested chromosomes, which can be linked to genetic anomalies that cause azoospermia in men. The physician assesses the results and depending on the percentage of aneuploidies and the chromosome(s) where it is identified, he/she will suggest to the couple the most suitable IVF method.

Recent studies have revealed that increased levels of DNA fragmentation in sperm, due to severe oxidative stress, may be the reason for sterility issues. These studies show that, sperm samples with DNA damage higher than 30%, might significantly reduce the odds of achieving pregnancy.

DNA fragmentation test is recommended in the following cases:

DNA fragmentation test is not related to the semen analysis. Samples with normal sperm concentration, motility and morphology may have increased percentages of DNA fragmentation, and vice versa.

In case of abnormal results, a treatment with antioxidant medication for a period of at least 90 days is recommended. If there is no improvement, a testicular biopsy or testicular sperm extraction (TESE or FNA) may be required, in order to obtain sperm with lower percentage of deformation.

Sperm DNA fragmentation is associated with low percentage of pregnancy rates because the known techniques for isolating and enriching sperm cannot distinguish those sperm with a low index of DNA fragmentation.

In order to overcome this limitation, a new method for sorting and enriching sperm is now available: the sperm sorting device.

It is a disposable microfluidic sperm sorting chip that isolates motile sperm directly from unprocessed semen, offering an enriched population of normal sperm with improved biological parameters, including DNA integrity.

It is a modern diagnostic test developed by IAKENTRO and it helps in the assessment of endometrial suitability for embryo transfer.

The test is performed during the usual gynaecological examination without requiring anaesthesia with the use of a small catheter similar to that used for embryo transfer.

Because it provides valuable information, which help determine the appropriate day for the embryo transfer, as well as the corresponding preparation protocol.

It is indicated for all women who will undergo In Vitro Fertilization (IVF), but mainly for women with unexplained infertility and multiple failed IVF attempts.